IDC Frontier has DDoS prevention systems set on its backbone network in order to surely provide stable internet connections and networks as a Data Center provider.

If you want to have additional DDoS countermeasures installed on your network, please consider using our DDoS Guard, which is provided for a fee. 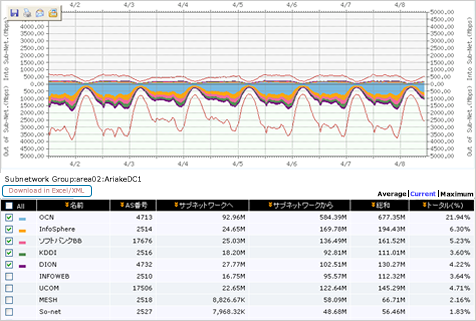 DDoS Guard offers you DDoS countermeasures on your network.

Access Report is provided for a fee of ¥10,000 (tax excluded) and up per month. Grasp the current situation to begin with.

Analyzed data is reported to you through Customer Portal in the form of graphs. Flow statistics are kept available for a year.

Only malicious traffic is selectively cut off

Dynamic signature, which generates signatures, or filters, automatically to cut off relevant traffic, is adopted.

They are dynamically filtered by behavior detection.

Massive attacks are handled as well

Extensive attacks as big as in 10 gigabits are effectively dealt with.

The following 3 types of services are offered.

* The listed prices do not include tax.

* Although you do not subscribe to the paid services, in the case your being under a serious DDoS attack, the prevention measure may automatically triggered in order to avoid IDC Frontier's networks to be affected. However, the triggered measure would not include the dynamic signature and the behavior detection, which are provided as a part of the paid services.